America: The New Conquest of the West

The North-West of the United States has become the new Eldorado for Americans in search of wide open spaces and for nostalgic Americans. freedom. In these breathtaking landscapes, the fewer rules and laws there are, the less the federal state intervenes, the better! But not everyone is happy about the new arrivals…

This “Promised Land” today attracts those who flee the cities and unashamedly reject the woke, LGBTQ, Black Lives Matter movements, these trends that are shaking society everywhere else in the United States. Opposed to abortion, in favor of carrying firearms, these mostly white Americans, often Christians with evangelical tendencies, settle by the thousands in this part of America three times the size of France. And transform it little by little into a country apart. Like a new colony.

Gary Grabli and Tam Melacca follow the installation of a family from San Francisco, and set out to meet these new settlers, Viper, the Jimi Hendrix-loving yet ultra-reactionary biker, Brett, the pro-Trump real estate agent who selects his clients according to their political ideas, Pastor Bradshaw who advocates holy war armed with a guitar and a pistol, or Ammon Bundy, who is campaigning for a post of governor when he has done two years jail time for armed rebellion against the FBI. 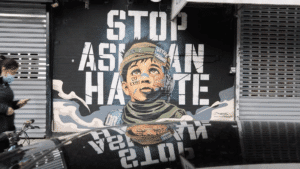 In the USA, a new identity movement is emerging. Its mission: to fight against ethnic, sexual and gender discrimination and to impose new rules. Its name: “woke”.

In the United States, temperatures are breaking all records. Last summer in California, temperatures reached almost 60° in some areas. But talk of climate change deeply divides the country. And, as always, the poor pay the highest price.

Miami Vice: Rebels of the USA

Located at the tip of Florida, Miami is one of the most attractive cities in the United States. For many, it is also the most rebellious in America. Historically, Florida has always been the subversive state of the United States.