After the euro and the refugee crises, the outbreak of the Covid-19 pandemic was the third crisis in a row, for the European continent. A single-celled organism had managed to expose not only the weaknesses of neoliberalism —a creed built on faith in free markets, deregulation, and small government that has dominated societies for the last 40 years, but also the failure of European values.

‘Chained’ narrates the five-year story of three successive crises in Europe with Greece in its epicenter. Being the latest guinea-pig of neoliberal recipes imposed by the Troika during the euro crisis, the country suffered an unprecedented reduction of its GDP by 25% – equivalent to a war. It also witnessed the devastation of the welfare state, the dismantling of the public health system, and the rise of inequalities and fascism.

Starting from 2015, acclaimed filmmaker Yorgos Avgeropoulos witnesses the euro crisis – having unprecedented and exclusive behind-the-scenes camera access to the negotiations of the then Greek left-wing government with the country’s lenders. This allows him to fill-in crucial missing pieces in the puzzle of those days, actions that were so decisive in re-shaping the European political landscape, and to capture the battle between two ideologies which clashed openly in the heart of Europe for the first time after Cold War. Alongside, he observes the refugee crisis as it developed through the years and the rise of nationalism and fascism in Greece’s increasingly polarized society. The film ends with the coronavirus crisis, and how it challenges the dogma of “money first”, exposing the failures of harsh austerity and supposed “European solidarity”, allowing the emergence of selfish national policies and nationalism – for the elimination of which the EU was founded.

‘Chained’ is a character-driven, profoundly human film: Avgeropoulos as well as having exclusive access to the national and international political scene, he followed the lives of people from different layers of his society, including a refugee couple from Syria, a mother whose child was murdered by Golden Dawn, a housewife, an LGBT activist and a young doctor. The result is a unique and multiple story-lined documentary: a tale which evolves and unfolds with the characters over time as they face difficult decisions, even to partially achieve their goals.

‘Chained’ is the cinematographic mosaic of a European dystopia, posing critical questions regarding the future of Avgeropoulos’ country, as well as Europe’s. 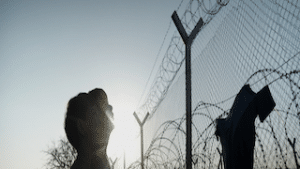 Torn apart by war and politics: from Germany Raf’aa prays to be reunited with her young family, who are trapped in one of Europe’s worst refugee camps

Greece: Point of No Return

Years of austerity and cuts have destroyed the lives of many Greeks. But more and more people are using the crisis as an opportunity and responding with innovative ideas.