The Secret Lives of the Maharadjahs

In Rajasthan, otherwise known as ’The Land of Kings’, the Maharadjahs have lost none of their famed prestige. Century-old traditions are held true even today, and royal legacy is of utmost importance. Common people kiss the feet of their princes and offer small amounts of money to those millions times richer than themselves as signs of respect and submission.

Danenjay Singh, heir to the throne of Khimsar, is getting married. The team of reporters has been invited to the week-long ceremony to document the extravagant proceedings. On the seventh day, the young prince will climb aboard an elephant and find his wife, who up until this moment, he has never seen and was chosen by his grandmother. With sunglasses, bodyguards, speedboats and a an entire airfield of toy planes, Laksharaj Singh has taken over the family business of managing the 10 converted palaces he inherited from his father, which are now a series of luxurious hotels. But despite his tabloid exploits, his primary duty is to enter into a decent marriage. Padmanabh, 13, is the heir to a €500million fortune, which he gets a taste of on his birthday, in a commotion of gestures and formalities.

This report looks at the ceremonious splendour and indulgence of these families and their Rajputs, in a country marked by inequality and gross poverty. We also see how these young men, despite their grandiose destinies, wish they could have a normal life.

Love and Sex in India

It's the birthplace of the Kama Sutra and Bollywood romances but in real life, kissing in the street or just talking about sex in India is considered obscene. 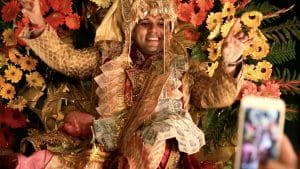 There are now more billionaires in India than there are anywhere else in the world. We infiltrate this tightly knit circle of India’s new billionaires.