In the 1980s, Richard Hambleton was the Shadowman, a specter in the night who painted hundreds of startling silhouettes on the walls of lower Manhattan and, along with Keith Haring and Jean-Michel Basquiat, sparked the street art movement.

At the height of his first commercial and critical success, Hambleton was featured in LIFE magazine and acclaimed at the Venice Biennale. Critics revered him as a definitive American Pop-Expressionist artist. But uncomfortable with his own success, he alienated those around him, from art dealers to close friends. And, just as suddenly as he had appeared, he disappeared. After drug addiction and homelessness sent him spinning out of the art scene for 20 years, the Shadowman gets a second chance…but will he take it?

Selected for Tribeca and following a US theatrical release, this acclaimed film plunges the viewer into the chaotic life of a forgotten artist, from early fame as a painter and denizen of the Lower East Side, through his struggles with heroin and his surprising comeback. Featuring rare footage of the 1980s music and art scene and a memorable soundtrack with songs by the bands who were part of the same downtown NY scene as Hambleton in the 1970s (Talking Heads, The Ramones, Blondie, & Suicide), it is also an indelible portrait of New York City from a lost, transformative time. Before Banksy, there was Hambleton.

Produced over the course of a decade, Worlds of Ursula K. Le Guin is a journey through the writer’s career and her world’s, both real and fantastic.

'World of Darkness: The Documentary' profiles the cult role-playing games 'World of Darkness' and 'Vampire: The Masquerade' that created a phenomenon in the 1990s – a zeitgeist that helped shape and define film, literature, fashion and club culture. 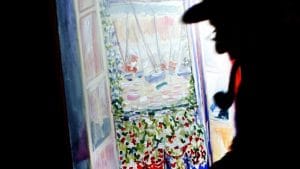 He’s the master-forger, famous for duping the art world for 30 years and flooding the market with thousands of fakes. But he never copied anything. Instead Guy Ribes painted pictures that could have been made by the great artists themselves.