Dicing With Death: Botswana, Run For Your Life

The real lives of the people of Botswana is far from the usual picture postcard image. CHAIDI, MONTY, MAREKO, SEKERE live in the heart of a country that is nothing but one vast desert: Botswana. Everybody struggles to keep their job and support their family, but in the all-prevailing fine sand it’s impossible to move around without a 4-wheel drive. And with tens of thousands of wild animals on the roam such as lions and elephants breaking down is not a reassuring prospect.

Normally, once a year, only the OKAVANGO delta, which flows into this desolation, provides a little coolness and vital resources. However, this year the water did not come. The drought is posing a serious threat to the lives of the people and animals. The struggle for survival is getting more intense and global warming makes the problems worse. A merciless war over water is being waged between the elephants and farmers like Monty. Taking his domestic animals to water becomes a way of the cross and flocks are dying. In what looks an apocalyptic setting, Lake NGAMI has changed appearance to become a vast puddle of mud.

MAREKO struggles to catch the few remaining catfish amidst the hippos bogged down in stifling slime. To deliver supplies to his grandmother, penniless CHAIDI walks for hours over a sun-baked track. At the end of the trail, hungry children await his pack of sugar. In Botswana, the entire community organized around cattle breeding and consumption is under threat from the terrible effects of global warming. And yet, in the Kalahari Desert, SEKERE and his mother, MOGATLANYANA, the oldest representatives of southern Africa, known as the Bushmen, still remember how to live in harmony with nature by using water from roots and dew. Imbued with the spirit of freedom, they are trying to return, in an old pick-up, to the land of their forefathers from which they were driven.

Dicing with Death: Bolivia, The Yungas in The Clouds 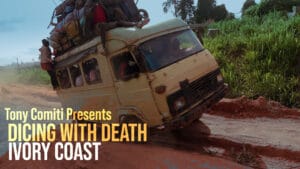 Dicing With Death: Columbia, The Intrepid of The Andes

Any cookies that may not be particularly necessary for the website to function and is used specifically to collect user personal data via analytics, ads, other embedded contents are termed as non-necessary cookies. It is mandatory to procure user consent prior to running these cookies on your website.